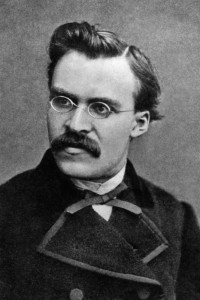 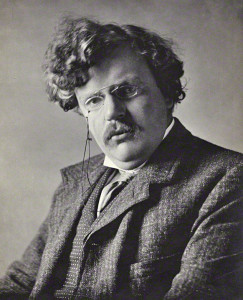 Chesterton was a young man when Nietzsche succumbed to illness but the work of the German philosopher was well known to him.

They were poles apart. Nietzsche was a radically modern thinker whereas Chesterton was an English gentleman and devout Catholic. Although Chesterton despised Nietzsche’s pessimism, he did have a certain respect for the radical philosopher, referring to his ‘inspiration of wild freedom’.

When they meet in The Sage Train, Nietzsche is all on his own as befitting the loneliness the philosopher experienced in real life. A highly strung intellectual, Nietzsche’s final descent into madness was brought on when he saw a cab driver whipping his horse. The philosopher flung his arms around the animal’s neck before falling onto the pavement in mental collapse. He never recovered and died having not spoken for 11 years.

Nietzsche proposed the abandoning of rules in the light of the assertion that `God is dead` and suggested that a true moral hero would be an Übermensch – a man radically free of society’s norms. For a brief moment Nietzsche thinks he has found him in Chesterton when they meet on the fictional path. Nothing could be further from the truth.