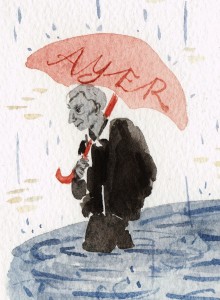 AJ Ayer was an Oxford scholar and a brilliant mind. Caustic and witty, he spawned a movement known as Logical Positivism in the inter war years in Britain. Ayer questioned the nature of language – particularly the language of religion and morality– and wished to test its claim to be meaningful in the normal sense of the word. He percieved a fundamental difference between a statement such as ‘God is good’ and ‘the butter is on the table’. The latter is open to verification – we can use our eyes to see if the butter is there, whereas the former evades such a test.

Not being verifiable, Ayer asserted that this type of language was  not only meaningless but served no function. The statement ‘Happiness is good’ is as meaningless as ‘a grunt or a moan, as is the statement ‘God exists’.

‘If I say to someone, “You acted wrongly in stealing that money,” I am not stating anything more than if I had simply said, “You stole that money.” In adding that this action is wrong I am not making any further statement about it.’  (Language Truth and Logic)

When we meet him in The Sage Train, Ayer is spending a night in Cambridge where he has a number of friends and admirers. He is in his element on the Master’s Table. However, a death in suspicious circumstances challenges his views about meaningless language.