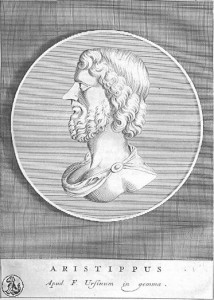 We know little about Aristippus apart from the letters of Diogenes Laertes.

Aristippus had been a follower of Socrates and was one of the more radical of ‘the gadfly’s’ disciples. His goal was instant pleasure. He had a mistress named Lais whom he claimed ‘not to be possessed by but to possess’.

Aristippus was the founder of the Cyrenaic school. He believed that pleasure was  fleeting; evaporating as soon as it was achieved. The experiencing self is also transitory . The man of the morning is not the man of the night – or even of an hour later. This deep-seated freedom allowed Aristippus to scandalise Greek society. He exposed his infant son to the elements and is said to have likened the child’s death to the disposal of phlegm and vermin.

Aristippus was not afraid of scandal. He dressed as a woman to amuse the tyrant king Dionysius in an action clearly designed to provoke the greatest possible outrage to his peers; the male-revering Greeks.  In The Sage Train he is remembered by Dianthe whom he had known as a young girl.