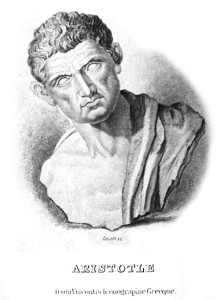 Aristotle entered Plato’s Academy while still a young man and stayed there until his teacher’s death. In terms of relevance to our daily lives,  Aristotle has had at least as much to contribute as his illustrious teacher.

So much goes back to Aristotle. He had immense curiosity about this world we live in and devoted his life to trying to understand it. A ‘scientist’, logician, botanist, inventor of words (and therefore ideas), Aristotle studied the world around him and arrived at a unifying principle. That everything that lives has a telos – or purpose – which is the end to which it strives. Whereas it is easy to assign a telos to a tree (to grow, flower and seed) it is more difficult to decide on the overriding telos for a human, but he linked it to our distinctive ability to reason.  Only humans have reason. Used in the right way,  reason helps us achieve the ultimate telos of well being – `eudaimonia` which comes through the right kind of life.  For him this was a life lived virtuously; in tune with our moral compass.

In common with social norms Aristotle had a young male lover – an eromenos but he also had a wife, Phythias, who died while he was in Athens. He then had a relationship with a girl – Herpyllis of Stagira – who bore him a son Nicomachus – after whom he entitled his famous work Nicomachean Ethics. In the final story of The Sage Train, David is trying to translate the works of a concubine of Aristotle – who may be Herpyllis. David’s life is compromised by illness whilst that of his brother is successful and wealthy. Both of them are ‘virtuous’ but their virtue is put to the test when their father behaves in an uncharacteristic way.