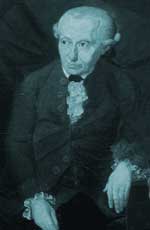 Some aspects of the depiction of Kant are among the most true to life. Kant had a horror of ‘venturing abroad’ and considered anywhere outside Konnigsberg “abroad”. He was tended for many years by his servant Martin Lampe (who in the story has transmogrified into Josef Steigler) and this same servant accompanied Kant on his famous daily walk  that was so precise, the citizens set their clocks.

Kant’s had a prodigious appetite for work. When we meet him, he is writing ‘The Groundwork…’ although, strictly speaking, much of reasoning that he explains to Josef is to be found in other writings.

In The Sage Train, Kant’s deontological theory is tested by the demands of his compassionate servant who has been approached by a desperate mother. The story asks us to look at the benefits of duty, when every instinct tells you also to  consider the consequences. There is no room for outcome with Herr Kant – though his servant is not quite so clear.