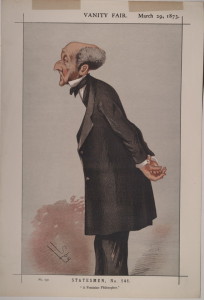 John Stuart Mill had a fearsome childhood. From the age of three he spent  much of his time with his father with whom he learned Latin and Greek. He developed a biting intellect and became – like his father – a disciple of Bentham who advocated  ‘the greatest happiness for the greatest number.’

Mill met Harriet Taylor – a married woman who shared his political ideals – and the couple fell passionately in love.  Their relationship caused a scandal amongst Victorian Society but the pair did not marry until after Harriet became a widow. Their own marriage was tragically short. Just seven years in to married life, Harriet died. Mill visited her grave every day and was looked after by her daughter – Helen Taylor – who gave up her acting career to help him with his work.

Mill was a profoundly modern thinker. A believer in all things liberal; he campaigned tirelessly for woman to have the vote and his book ‘On Liberty’ shaped the way we think today. His famous “no harm principle” can be paraphrased as ‘Everyone has the right to do anything, provided they don’t harm anyone else’.

When we meet him in The Sage Train,Mill is living in France when he meets the young Evangeline. Exploring with her his version of Utilitarianism and in particular the rights of the oppressed, the story offers an insight into  Mill’s ideas of quantifiable pleasures, how they differ from Bentham and in particular how they relate to Justice.