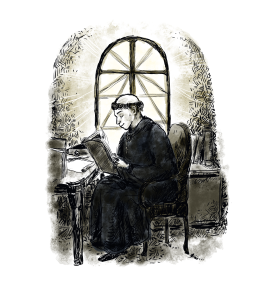 Thomas Aquinas was a Duke’s son and related to some of the most powerful men in Europe, including the Holy Roman Emperor. He could have had a distinguished political career but he chose instead to be a Friar with the wandering, black robed Dominicans. His brothers were so enraged by this `scurrilous beggary` that they kidnapped him, locked him in a castle and tempted him with a prostitute – whom he threw out. This was his only known outburst. Aquinas was a scholarly man who travelled widely and spent much of his time at the university in Paris.

Aquinas had Aristotle’s works translated from the Greek and – following Aristotle’s understanding of a purpose for every thing  – suggested a ‘Natural Law’ in which everything seeks its rightful goal.

It is to Aquinas that the Catholic Church owes much of its understanding and who continues to influence our lives today. The medical idea of ‘double effect’ –  that concerns him following Luc’s experience in The Sage Train –  is still a problem today.

Towards the end of his life Aquinas had a profound mystical experience and vowed never to write again, saying `All I have written appears like straw compared to what I have seen`.