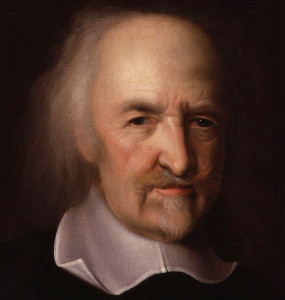 In John Aubrey’s  Brief Lives, one of the lives the biographer chose to record was  indeed Thomas Hobbes and the physical description of him in The Sage Train is lifted directly from Aubrey. When we meet him, Hobbes is elderly, having returned to England with the Restoration of the Monarchy (he had tutored Charles II as a Prince in exile). Chatting with Aubrey in the Black Eagle, he is timid – starting at every loud noise – and immediately thinks his watch has been stolen when he discovers that it’s gone.

Hobbes’  work Leviathan  sets out his belief that man is driven by forces beyond his control. This mechanistic drive to survive would lead to chaos and lives ‘nasty, brutish and short’ if nothing was done to check it. So, society establishes social contracts – giving some of its rights to the Ruler in exchange for protection – and lengthy, more pleasurable lives.

Hobbes was rumoured to be an atheist and in the religious fervour of the era, this was a dangerous stance. But he goes to the law courts with Aubrey, where they watch a woman being sentenced for a crime on the most flimsy evidence possible.